Knowledge Is Power: Books to Help You Stay Informed

“As [Disconnect] shows, cell phones may actually be doing damage to far more than our attention spans-and could, in fact, be killing us.” -Salon.com.

Since the invention of radar, cell phone radiation was assumed to be harmless because it wasn’t like X-rays. But a sea change is now occurring in the way scientists think about it. The latest research ties this kind of radiation to lowered sperm counts, an increased risk of Alzheimer’s, and even cancer. In Disconnect, National Book Award finalist Devra Davis tells the story of the dangers that the cell phone industry is knowingly exposing us-and our children-to in the pursuit of profit. More than five billion cell phones are currently in use, and that number increases every day. Synthesizing the findings and cautionary advice of leading experts in bioelectricalmagnetics and neuroscience, Davis explains simple safety measures that no one can afford to ignore.

**CLICK HERE to purchase Dr. Davis’ Book: DISCONNECT- The Truth About Cell Phone Radiation, What the Industry Is Doing to Hide It, and How to Protect Your Family

Anticancer: A New Way of Life

Anticancer has been a bestselling phenomenon since Viking first published it in fall 2008. Now, a new edition addresses current developments in cancer research and offers more tips on how people living with cancer can fight it and how healthy people can prevent it. The new edition of Anticancer includes:

• The latest research on anticancer foods, including new alternatives to sugar and cautions about some that are now on the market
• New information about how vitamin D strengthens the immune system
• Warnings about common food contaminants that have recently been proven to contribute to cancer progression
• A new chapter on mind-body approaches to stress reduction, with recent studies that show how our reactions to stress can interfere with natural defenses and how friendships can support healing in ways never before understood
• A groundbreaking study showing that lifestyle modification, as originally proposed in Anticancer, reduces mortality for breast cancer by an astounding 68 percent after completion of treatment
• New supporting evidence for the entire Anticancer program 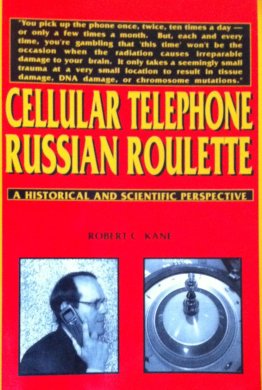 About the Author
Robert C. Kane has been actively employed in the telecommunications industry for more than thirty years . He holds a BSEE from the Midwest College of Engineering, an MSEE with an emphasis in electromagnetics from the Illinois Institute of Technology and also at the Illinois Institute of Technology, has completed the full course of study and research leading to the Ph.D. in electrical engineering with emphasis in the fields of electromagnetics and solid-state physics. As a research scientist and product design engineer, he has been directly involved with programs and projects for the design and development of portable cell phones, radio frequency mobile radios, microwave telecommunications systems, video display systems, and biological effects research.

Excerpts from the book:
“[A] repeated insult or irritation to a particular biological area,
such as a small region of the brain, can lead to irreparable
damage. [G]iven the existence of energy absorption “hot spots”
. . . each damaging exposure to radiofrequency radiation
provides a new opportunity that the damage will become
permanent.”

“[W]e can expect that no warning of brain tissue destruction
would be provided to a cellular telephone user until the damage
was so extensive that the scalp, which absorbs very little
energy, sensed heating.”

“Every action which occurs within that individual’s life during
that next week will be affected by the EEG modifications
resulting from the portable cellular telephone call.”

“[E]arlier, researchers have consistently reported that
transmitting antennas could not be operated close to the human
body—the human head-without violating the safe exposure
limits.”

“[T]he shape of the skull, thickness of sub-cutaneous fat,
muscle layering, and how an individual holds a portable
cellular telephone each contributes to make the energy
absorption different from one individual to another. The
important common factor, however, is that all individuals will
absorb a large portion of the radiation.”

“Today we know that even a single exposure to low level
radiofrequency radiation causes damage to the DNA makeup of
brain cells.”