Jimmy Gonzalez’ words will save lives.

Thank you Jimmy…Rest in Peace.

Mr. Gonzalez was diagnosed with the exact same type of tumor as our son Justis.

Watch video of Jimmy’s testimony to the Pembroke Pines Commission which resulted in the passing of the first US Resolution to raise awareness on the health risks of cell phone radiation.

Jimmy Gonzalez, a Florida attorney who developed brain cancer after years of heavy cell phone use, petitioned for the Pembroke Pines Resolution 3362 in 2012 to raise awareness about cell phone radiation. Gonzalez believed the radiation emitted by his cellphone was the cause of his cancer, and brought his case to Commissioners in Pembroke Pines. The Resolution was passed on October 17, 2012 and  expresses the city’s “urgent concerns” about wireless radiation emitted from cell phones and individual’s health. It encourages citizens to read their manuals and presents information on how to reduce exposure by using a headset or speakerphone. 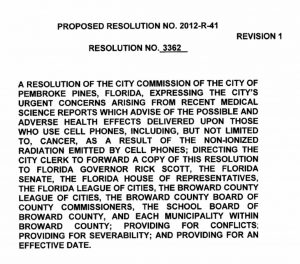 Resolution No. 3362: Commission of Pembroke Pines, Florida Expressing the City’s Urgent Concerns of the Possible Adverse Health Effects Due to Cell Phone Use

“WHEREAS, cell phone user manuals and user guides state in various ways that the cell phone user should always keep it centimeters or millimeters away from their heads and bodies so as to reduce their bodies’ exposure to radiation; and…”

WHEREAS, there exists an ongoing scientific debate as to whether children and teenagers are more susceptible than adults to the possible ill effects of being exposed to cell phone emitted radiation; and…”

Following his service in the United States Marine Corps, Gonzalez attended Cornell University and later George Washington University of Law. Gonzalez ran his own family law practice until he was diagnosed with Glioblastoma Multiforme, a highly malignant and aggressive tumor of the brain, in 2011. He had two different tumors removed, one from his left hand and the other within his brain above his left ear. Gonzalez noted that he had used his cellphone everyday for well over 30 minutes over a period of ten years, using primarily his left hand and left side of his head to speak. He hypothesized that his cellphone use may have been a large factor.

“One day, it came to me,” Gonzalez told the Sun-Sentinel, “maybe there’s something in common with my hand and head.”

“Do I have 100 percent scientific study that can say well this is what caused it?” Gonzalez told NBC 6 South Florida. “No but I can’t think of anything that would explain this otherwise.”

The document advises individuals to keep cell phones at least one inch away from their body, use a headset or speakerphone, and send messages via text or email (Sun Sentinel, 2012)

“Our city’s resolution isn’t about creating panic and alarm,” said Commissioner Angelo Castillo. “It’s about raising awareness in a responsible way to ensure that the health of all cellphone users is protected.” (NBC, 2012)